Treating Depression with TMS therapy since 2014

Depression is one of the most common conditions suffered by Australians, with an estimated one million people dealing with it each year. The treatment process can be difficult for those who have been battling the illness long term. Many people who have tried medications and experience no improved symptoms or adverse reactions may not be aware that other therapies are available in Australia. This new non-invasive approach is known as transcranial magnetic stimulation TMS. This drug-free method of treating depression is effective, scientifically proven, safe and TGA approved.

What is Transcranial Magnetic Stimulation TMS?

It is a non-invasive procedure that improves the symptoms of depression through the use of magnetic fields that stimulate nerve cells. It is particularly effective for people who have experienced little or no success with common treatments, e.g., medication, psychotherapy. It is a relatively pain-free procedure that is drug-free and offers fewer side effects to the alternatives.

During the electromagnetic therapy session, an electromagnetic coil is placed against the patient’s scalp near the forehead. A magnetic pulse is then painlessly delivered into the part of the brain that is responsible for mood control. The biology of TMS (or rTMS treatment) is not yet completely understood by scientists, but its results have been well documented. The indications are that it stimulates that area of the brain, improving the patient’s mood and reducing the symptoms. It provides a similar result to ECT (electroconvulsive shock therapy) but without the hassle of going to the hospital, the stress of anaesthetic and the impact of side effects.

For some people, standard treatments are not effective. In many cases, medications and psychotherapy (speaking with counsellors and other professionals) simply don’t work. That’s when it is often a good idea to try something new.

Typically, a good time to consider this is when two or more anti-depressants have failed to reduce the symptoms or if side effects are so significant they become intolerable.

There are many benefits in choosing TMS as a treatment for depression, beginning with the fact that it is drug-free and non-invasive. Many people are concerned about the side effects of consuming anti-depressant medications and for good reason. Anti-depressants can have a number of documented side effects on the human body, ranging from nausea and weight gain through to insomnia and loss of sexual desire. TMS has been used on patients for more than three decades, and there have been no long-term risks associated with the procedure.

Another benefit is that it is a straightforward process, with patients staying awake and alert throughout. You can have a cup of tea, listen to some relaxing music and read a magazine while it is being performed.

And of course, the greatest benefit is that it works. Patients report a great improvement in their symptoms, even when other treatments have failed. The improvement is not limited to the period when the treatment is being carried out – generally between four and eight weeks – and continues well afterwards. A number of studies have shown that this treatment method has significant long-term effects on patients. 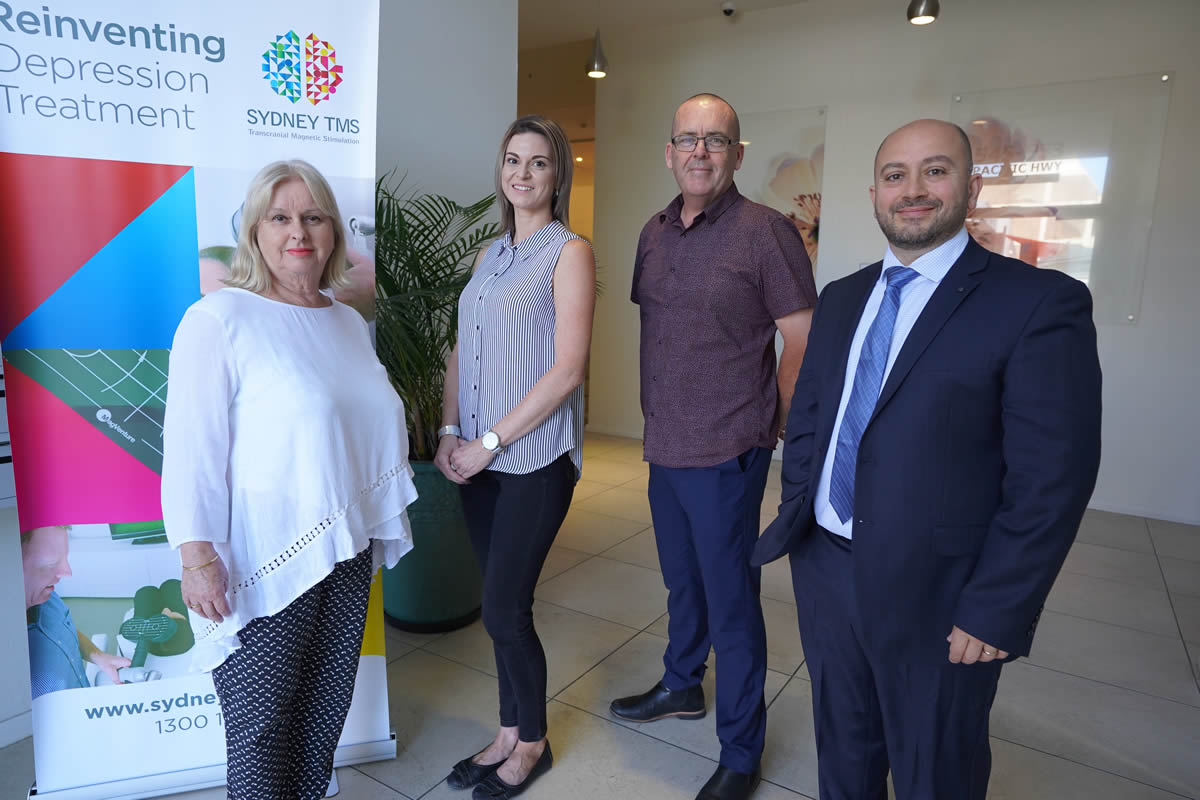 Want to know where our clinics are located?

Is TMS for Me?

Why not try our self-test to find out if you are suitable?

You will need a doctor's referral before your first appointment.

Read more about research that has been conducted.

What will TMS treatment cost me?

Where do I start?

Start by taking the self test “Is TMS for Me?”

Next download and print the referral form and take it to your treating GP or psychiatrist. Discuss your results with your doctor.

Contact Sydney TMS to discuss TMS further. You can contact us at any point during your journey in case you have further questions or concerns.

Our aim is to be the leading provider of TMS therapy in New South Wales. Through the outpatient setting we hope to create more choice, flexibility and treatment options for our clients.

At the top of our list is service and providing quality client care. We believe that delivering good medicine goes hand in hand with providing excellent care.

We embrace innovation and technological advances that assist with depression treatment. All treatment provided is evidence based and approved for use in Australia.

Why can’t I come across other TMS clinics so easily?

TMS has only recently been on the radar as a beneficial treatment in recent times. People are only starting to learn about its’ important role in treating depression. The benefits transcranial magnetic stimulation therapy for depression can bring for patients are slowly being discovered, with fewer side effects compared to other alternative methods in the field.

For TMS Sydney communities, the addition of TMS treatment in the Medicare Benefits Schedule will allow people access to transcranial magnetic stimulation treatment for depression. It is the type of depression treatment that is ideal for the clinic setting.

Is there anything I need to prepare before going to a session?

The process of transcranial magnetic stimulation therapy for depression is not strenuous compared to other methods, in that patients can even go through the process while sipping a cup of tea.

How long do sessions for TMS take?

Transcranial magnetic stimulation for depression, also known as TMS therapy takes approximately 30 minutes per session. For those with depression, we suggest 20 sessions. In regards to those with PTSD and OCD, while the session time is the same, the treatment course runs slightly longer with approximately 30 sessions. It is important that you have a GP referral or specialist referral with you when you make your first appointment with Sydney TMS as your history and diagnosis is essential to your individual treatment plan

Who can administer TMS treatment?

As mentioned above, a patient will need to have a GP referral before commencing TMS treatment. To undergo transcranial magnetic stimulation (TMS), a patient is assessed by a TMS psychiatrist and treatment is then administered by a TMS operator. A TMS clinic physician will prescribe the treatment plan and closely follow your course along the way. The TMS operator is there for every session to support you and provide the treatment. They are also in constant contact with the treating TMS doctor.