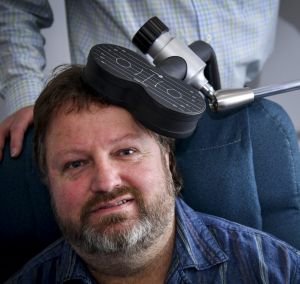 A recent study by Professor Paul Fitzgerald at The Alfred and Monash University, has found that one third of patients with severe depression go into remission with the use of TMS therapy. In total there were 1132 patients with severe depression in the trial. Transcranial magnetic stimulation is a treatment for depression that uses magnetic field technology that sends pulses into the frontal areas of the brain to stimulate inactive areas. The study was covered in a recent article in the Sydney Morning Herald which featured a patient of Professor Fitzgerald’s who experienced the treatment through the study. To read the article click here

There are many forms of treatment for depression and TMS is one non-invasive forms of brain stimulation. According to Professor Fitzgerald “treatment at a higher stimulation intensity delivered improved response rates” he also went on to say that “Older patients also responded better”. According to the study, results seem to suggest that patients with recurrent rather than single episode depression experienced a greater response rate.

According to Professor Fitzgerald, TMS therapy has the potential to treat a wide range of other disorders.